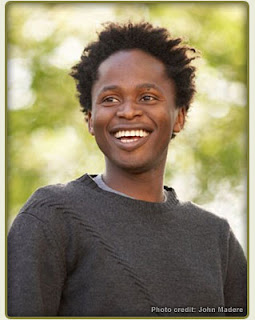 At the age of 13, Ishmael Beah was forced to become a child soldier in a horrific civil war that started in 1991 in Sierra Leone. Rebels had burned many villages and killed everyone in them, including his family. He and a group of boys roamed from village to village looking for food and shelter, just trying to stay alive. They had many close calls when they were mistaken for rebels and were almost executed. They saw things that children shouldn't see...mutilated dead bodies (including those of other children) in piles and blood soaking the ground...and they cheered each other with boyish games to avoid feeling the pervasive fear and despair that drenched this war-ridden country.

They thought they had finally found safety at a military encampment in Yele. Ishmael was given food and stayed in a cement brick house with over 30 other orphaned boys between the ages of 7 and 16. For a while, it seemed idyllic as he helped prepare food and played his beloved soccer. One day everything changed. Lieutenant Jabati announced that the boys were needed to fight the rebels and told them "This is your time to revenge the deaths of your families and to make sure more children do not lose their families." 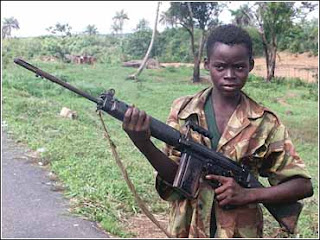 And so it began. Ishmael and his friends...upon threat of death if they tried to escape...became child soldiers like the one in the photo (Credit: Foreign Policy Assn). They were given AK-47 assault rifles, trained in how to attack and kill, and given marajuana, amphetamines, cocaine, and brown-brown (a mixture of cocaine and gun powder) to dull the horror of killing. They believed their commanders had juju...magical skills...and they did what they were told, which included execution style killings, slitting throats, and many other horrendous acts to prove their loyalty and soldiering ability.

Ishmael survived many harrowing scenes in which less clever and determined men and boys perished. He was rescued after almost three years by UNICEF and sent through an 8-month rehabilitation program, which required his caretakers...especially the very caring Esther who became like a mother figure to him...to be willing to see him and other former child soldiers as children and not as willing killers. He had a really difficult time withdrawing from all the drugs and facing what he had done. He suffered flashbacks and nightmares and had to relearn to trust adults.

He was repatriated by going to live with a long-lost uncle and his family in the city of Freetown. He was one of two children chosen to represent Sierra Leone at the United Nations First International Children's Parliament in New York City. There he told his story of being a child soldier and the effects it had on him and other children.

Ishmael returned to Sierra Leone, attended school, and continued living with his uncle. On May 25, 1997, soldiers entered Freetown and raped, killed, threw tear gas, and plundered. Ishmael's uncle suddenly became ill and died. With war raging around him, Ishmael knew that he needed to escape or he would be killed if he refused to become a child soldier again.

He made the decision to never go back to that soul-killing way of life and called Laura Simms...one of the NGOs (non-governmental officials) he'd met at the New York conference...and asked if he could come live with her. She said yes. With a few clothes and some money she sent him, he started the very dangerous path out of the country and escaped (barely) to Conakry, Guinea. From there he was able to get to New York and Laura became his foster mother.

Ishmael finished his last two years of high school at the United Nations International School in New York and went on to get a degree in political science in 2004 at Oberlin College. The book he eloquently wrote about his experiences...A Long Way Gone: Memoirs of a Boy Soldier...was published in 2007. I just finished reading that book and found it moving, disturbing, and in the end, hopeful.

There are hundreds of thousands of children worldwide who are forced to be soldiers. Since Ishmael was liberated from soldiering, positive changes have been happening in Sierra Leone. Child Soldiers: Global Report 2008 (located at http://www.childsoldiersglobalreport.org) states that "A landmark in international justice was forged by the conviction in 2007 by the Special Court for Sierra Leone of four people on charges that included the recruitment and use of children during the civil war." It goes on to laud Sierra Leone, Timor-Leste, and Liberia for establishing truth commissions to address the issue of child soldiers.

The report names these countries as having used child soldiers in armed conflict between April 2004 and October 2007: Chad, Democratic Republic of the Congo, Israel, Myanmar, Somalia, Sudan and Southern Sudan, Uganda, Yemen, and the UK (which sent under 18-year-olds to fight in Iraq). Under pressure from the United Nations and human rights organizations, some countries have ceased deploying child soldiers, but these victories have been limited. There is much work to be done.

To learn more about Ishmael Beah, you can visit the website http://www.alongwaygone.com. He has established the Ishmael Beah Foundation, which is "dedicated to helping former child soldiers reintegrate into society and improve their lives." He was a long way gone, but now he's a long way positively influencing the lives of others through his work with the Human Rights Watch Children's Division Advisory Committee, speaking before the United Nations, serving as a UNICEF Goodwill Ambassador, and doing other work to bring to light the effects of war on children.