Who better to add to a list of lesbian, gay, bisexual, and transgender profiles than Angelina Jolie?    Maybe it is too easy a choice, that it is just wishful thinking?  No, for when Barbara Walters asked Jolie in an interview if she was bisexual, Jolie responded: "Of course. If I fell in love with a woman tomorrow, would I feel that it's okay to want to kiss and touch her? If I fell in love with her? Absolutely! Yes!"

Born in 1975 in Los Angeles to actors Jon Voight and Marcheline Bertrand, Jolie has one older brother.  After her parents’ separation in 1976, Jolie moved with her mother and brother to Palisades, New York until she was eleven.  Once back in Los Angeles, she began a fascination with knives, wearing of dark clothes and began her “cutting” phase to ease the pain she felt for being ridiculed for her appearance.  She also spent a few years attending the Lee Strasberg Theater Institute.  Her interest in acting came not from her father’s career, but from going to the movies with her mother.


An Actress and Ambassador

Her early career included modeling and appearing in music videos for Lenny Kravitz and for Meatloaf, as well as acting in some of her brother’s student films.  She appeared in the movie Hackers, where she met her first husband, actor Jonny Lee Miller.  She gave a moving performance in Gia, playing the supermodel Gia Carangi, whose life was cut short due to drug addiction and AIDS.  Her real breakthrough came with Girl, Interrupted in 1999 for which she won an Academy Award, as well as her third Golden Globe and second Screen Actors Guild Award. 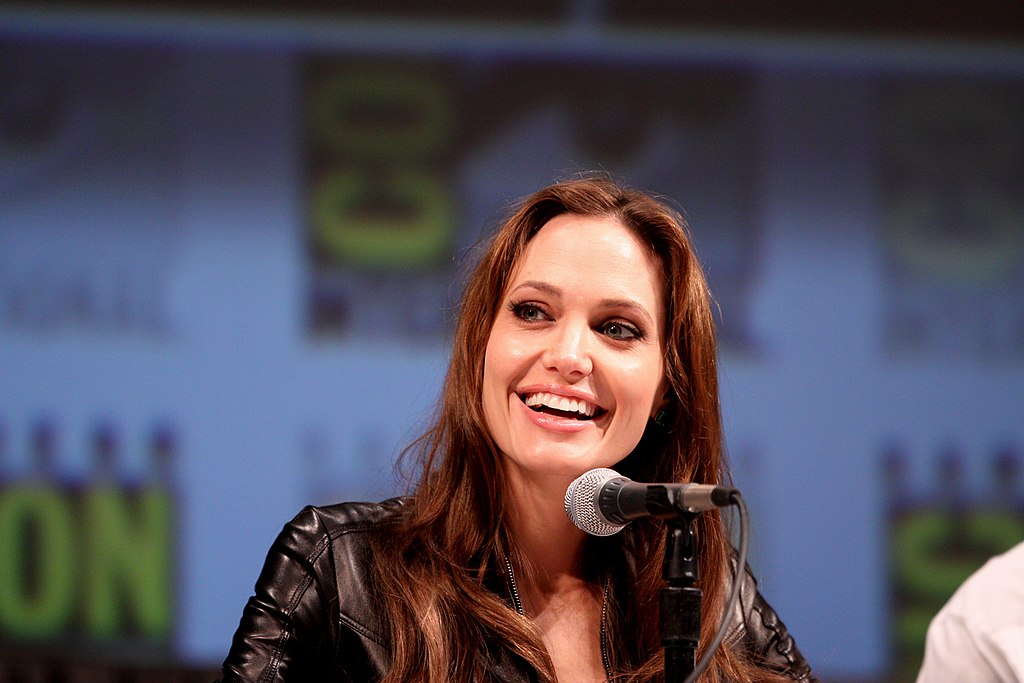 Other notable movies include Lara Croft:  Tomb Raider, Life or Something Like It, Beyond Borders, Original Sin, and Alexander.  In 1999, while shooting Pushing Tin, she met her husband, actor Billy Bob Thornton.  Many remember this time of red carpet appearances as full of public displays of affection between the two and the fact that they wore vials of each other’s blood around their necks.  1996’s Foxfire brought her into a relationship with her co-star Jenny Shimizu.  In 2003, she said of the relationship, “I would probably have married Jenny if I hadn't married my husband. I fell in love with her the first second I saw her."  Her more recent films include 2007’s A Mighty Heart and 2008’s Changeling, for which she was nominated for the Academy Award.

It was during the filming of Mr. and Mrs. Smith in 2005, that she met her current partner, Brad Pitt.  Though she was accused by many for the breakup of Pitt’s marriage to actress Jennifer Aniston, there was no public confirmation of their relationship until her 2006 People magazine interview where she declared herself pregnant with Pitt’s child.  Since then, the couple has adopted three children from Cambodia, Ethiopia, and Vietnam, and has given birth to two daughters and one son.

It was during her time in Cambodia filming Tomb Raider that Jolie became interested in humanitarian issues.  As Goodwill Ambassador for the United Nations High Commissioner for Refugees, Jolie has traveled to Pakistan, Sierra Leone, Tanzania, and Ecuador, to name a few.  She has spoken before Congress and continues to donate her time and money on behalf of children, refugees and other humanitarian issues around the world.  In 2006, she and Pitt founded the Jolie/Pitt Foundation to which they made donations of $1 million each to Doctors Without Borders and Global Action for Children.

In February, 2000, female readers of Jane magazine voted her “The Female Actor who Makes your Knees Weak”, and Jolie responded, “They're right to think that about me, because I'm the person most likely to sleep with my female fans. I genuinely love other women. And I think they know that."   Later that same year, Elle magazine asked her about relationships, and Jolie answered, “Honestly, I like everything. Boyish girls, girlish boys, the heavy and the skinny. Which is a problem when I'm walking down the street.”  Pitt is no slouch either in the LGBT world, stating in Parade magazine, “I have love in my life, a soul mate–absolutely. When someone asked me why Angie and I don’t get married, I replied, ‘Maybe we’ll get married when it’s legal for everyone else.’ I stand by that, although I took a lot of flak for saying it–hate mail from religious groups. I believe everyone should have the same rights. They say gay marriage ruins families and hurts kids. Well, I’ve had the privilege of seeing my gay friends being parents and watching their kids grow up in a loving environment.”

Angelina Jolie has homes in several countries and lives with her partner Brad Pitt and their six children.

Galveston LGBT Parenting Examiner by: Tracy Kachtick-Anders, Blog Author at examiner.com (Tracy is an artist, doula, and director of Open Arms Campaign, a non-profit to recruit foster and adoptive families)