Javier "Chicharito" Hernandez, who plays for Manchester United and the Mexican national team, has agreed to serve as a goodwill ambassador for UNICEF Mexico. 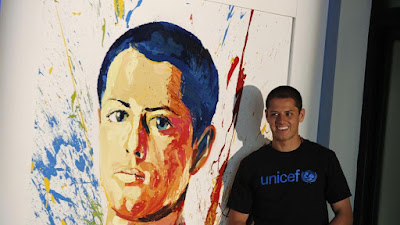 "My first move as a goodwill ambassador for UNICEF Mexico is to join the call for 10 for the children to move the score in favor of the children and teenagers of all our Mexico," Hernandez said.

The soccer player, who accepted his ambassadorship at a ceremony attended by about 150 people on Saturday, said the job was special because it had to do with Mexico's youth.

"What matters the most to me, what matters to me the most is to help lots of kids, all of the children in our Mexico, so they can help the country get ahead. I am so happy, thankful," the player said.

"This document is one of the most beautiful I've seen in my life and I am going to play this match with all my heart and all my life," Hernandez said.

The player has been doing charitable work in Mexico before joining the national team, which is in the United States.

Hernandez said he agreed to be a goodwill ambassador for UNICEF Mexico because it involved "bringing messages that help improve the lives" of children and helping them achieve their goals.