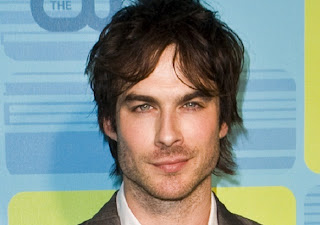 The actor and U.N. Goodwill Ambassador tweeted to his more than 2 million followers, “Had great meeting w/Cap Paul Watson of @SeaShepherd - I adore this man & his org. He needs some help & I need you guys to help me - No $ just tweets.” The star of “The Vampire Diaries” met with Watson at Germany’s BloodyCon vampire conference, where Watson was speaking.

Watson is still in Germany where he must remain until his extradition to Costa Rica is decided. The Sea Shepherd Conservation Society founder/president was arrested in Frankfurt last month on a warrant based on an initiative against illegal shark finning in 2002, a campaign featured in the documentary Sharkwater.

He has since been released on bail until the Germany Ministry of Justice decides whether or not he will be extradited. Watson remarked about the arrest, which came a decade after the campaign in question for an alleged ‘violation of ships traffic,’ “It’s very strange that this so-called extradition thing was dismissed by Interpol in every country except Germany. I haven’t gotten an explanation on that – but maybe the courts will enlighten us.” Meanwhile, Watson has made it clear that Sea Shepherd’s direct action campaigns will continue despite his current situation. He posted this list of their campaigns for the rest of the year to his Facebook.

Somerhalder isn’t the only celeb to speak out in Watson’s defense. The Red Hot Chili Peppers and champion surfer Kelly Slater have called for his immediate release, and Alicia Silverstone sent out an urgent call for support on her blog The Kind Life. Long-time friend of Watson and Sea Shepherd supporter Brigitte Bardot even offered to take his place in prison.
Sea Shepherd Society Twitter UN Goodwill Ambassador