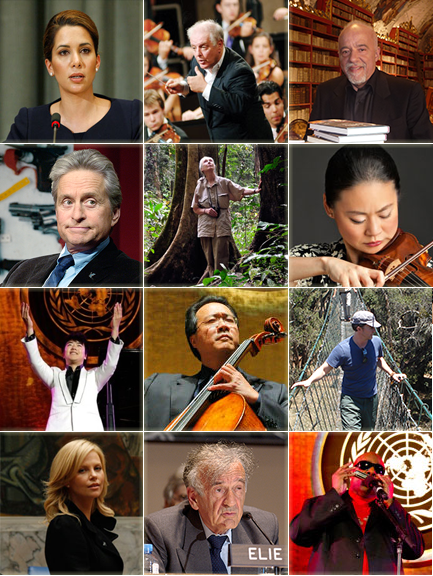 The messengers are initially chosen for a period of three years, although three of the current 13 messengers, Michael Douglas, Elie Wiesel and Jane Goodall have served for more than ten years.

The Messengers of Peace scheme was instigated in 1998 as a central addition to the system of UN goodwill ambassadors and honorary ambassadors, which has been run by the different UN agencies since 1954, when UNICEF appointed Danny Kaye as its first goodwill ambassador.

Daniel Barenboim (born 1942) is an Argentine pianist, conductor and music director. He gave his international debut performance as a solo pianist at age ten. Since then he has worked with orchestras all over the world. Barenboim is a polyglot, fluent in the Spanish, English, French, Italian, German, and Hebrew languages.

In 1999, he co-founded the West-Eastern Divan Orchestra, which brings together young musicians from Israel and the Arab countries to promote dialogue and unity of purpose between the various cultures of the Middle East. Recently, Mr. Barenboim has initiated a project for music education in the Palestinian territories, including the foundation of a music kindergarten and a Palestinian youth orchestra.

Paulo Coelho (born 1947), is a Brazilian lyricist and novelist. He is the recipient of numerous international awards. The author has sold 190 million copies worldwide and is the all-time bestselling Portuguese language author.

Through the Paulo Coelho Institute, the Rio de Janeiro native uses his global appeal to combat poverty and help underprivileged members of Brazilian society. He is also an advocate of multiculturalism through his work with UNESCO as a Special Counselor for Intercultural Dialogues and Spiritual Convergences.

Since 2009 he has been part of Secretary-General Ban Ki-moon’s “Network of Men Leaders”, a group of influential men who work in their spheres of influence to undertake specific actions to end violence against women. The Network is part of the “UNiTE to End Violence against Women” campaign. 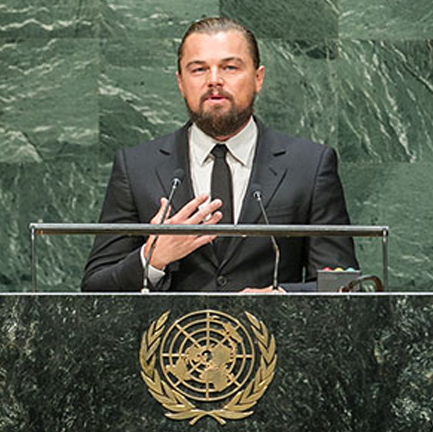 Leonardo Wilhelm DiCaprio (born 1974) is an American actor and film producer. He has been nominated for ten Golden Globe Awards, winning two, and five Academy Awards.

In 1998, he established the Leonardo DiCaprio Foundation dedicated to land, oceans and species conservation, as well as supporting efforts to mitigate climate change and bolster disaster relief. His foundation supports environmental causes through grant making, campaigning and media projects to inform and rally the public on specific issues. In addition to establishing his Foundation, Mr. DiCaprio serves on the board of several environmental protection organizations including the World Wildlife Fund and The Natural Resources Defense Council, as well as an Advisor on The Solutions Project, an organization dedicated to scaling up the adoption of clean, renewable energy.

Michael Kirk Douglas (born 1944) is an American actor and producer, primarily in movies and television. He has won four Golden Globes, including the Cecil B. DeMille Award, two Academy Awards and an Emmy Award.

Michael Douglas is fiercely committed to disarmament issues, including nuclear non-proliferation and halting the global trade in small arms and light weapons. He focuses public awareness on the United Nations’ efforts to strengthen peace and security by speaking publicly for greater controls on the illegal possession and circulation of small arms and light weapons. Mr. Douglas hosted a documentary filmed in Sierra Leone that was part of a United Nations/Showtime ten-part series titled “What’s Going On?” that helped bring attention to the plight of child soldiers.

Dame Jane Morris Goodall (born 1934) is an English primatologist, ethologist and anthropologist. Goodall is best known for her 55-year study of social and family interactions of wild chimpanzees in Gombe Stream National Park, Tanzania. She is the founder of the Jane Goodall Institute and the Roots & Shoots program. She has served on the board of the Nonhuman Rights Project since its founding in 1996.

The Jane Goodall Institute is widely recognized for creating innovative conservation and development programmes in Africa, where she began her landmark studies in 1960. Her global Roots & Shoots programme supports tens of thousands of young people in nearly 100 countries with projects that help people, animals and the environment.

Princess Haya bint Al Hussein (born 1974) is an equestrian who competed for Jordan in international show jumping competition and is the two-term President of the International Federation for Equestrian Sports (FEI). She is known as Her Royal Highness Princess Haya of Jordan (Arabic: ھيا‎).

Princess Haya founded Tikyet Um Ali (TUA) in her native Jordan, the first Arab NGO dedicated to overcoming local hunger. TUA provides food assistance and employment opportunities to thousands of poor families. In November 2012, TUA announced a campaign to quadruple the number of its beneficiaries in a drive to eliminate hunger in Jordan and help meet the MDGs on hunger by 2015. Princess Haya also chairs Dubai’s International Humanitarian City, now the world’s largest operational center for the delivery of aid both in emergencies and for long-term development. 10 UN agencies and 40 NGOs are members of the IHC which has supported relief efforts all over the globe including East Africa during recent droughts, in Pakistan during the 2009 floods, and in Afghanistan and Darfur. The IHC has also hosted UN and NGO staff evacuated during emergencies and civil unrest.

Lang Lang (born 1982) is a Chinese concert pianist who has performed with leading orchestras in Europe, the United States and his native China. Lang Lang began playing the piano at the age of three.

In October 2008, he launched the Lang Lang International Music Foundation with a mission to encourage music performance at all levels as a means of social development for youth. The Foundation operates with the conviction that music, as a universal language, can help bridge cultural gaps and unite communities.

Lang Lang has been recognized for his commitment to mobilizing support for improving the lives of children around the world, most notably as a UNICEF Goodwill Ambassador. As a Messenger of Peace, he helps raise awareness of the Secretary-General’s Global Education First Initiative, in particular fostering global citizenship.

Yo-Yo Ma (born 1955) is a cellist. A child prodigy, he was performing from the age of five. He has enjoyed a prolific career as both a soloist performing with orchestras around the world and a recording artist. Born in Paris to Chinese parents and educated in the United States, Mr. Ma is the recipient of countless honours and awards.

Believing that music can act as a magnet to draw people together, he created the Silk Road Project in 1998 to promote the study of cultural, artistic and intellectual traditions along the ancient Silk Road trade route, which sweeps through cultures from the Mediterranean Sea to the Pacific Ocean. In 2007, he contributed music for a DVD produced in support of the Stop TB Partnership Campaign with the World Health Organization.

Midori Gotō ((born 1971), usually referred to simply as Midori, is a Japanese born American violinist. She made her debut at the age of 11, when conductor Zubin Mehta added her to the program of the New York Philharmonic's New Year's Eve Gala in 1982.

Midori has established a record of achievement which sets her apart as a master musician, an innovator, and a champion of the developmental potential of children. In 1992, Midori founded Midori & Friends, a non-profit organization that brings music education programmes to thousands of underprivileged children each year. Two other organizations, Music Sharing (based in Japan) and Partners in Performance (based in the US), also bring music into the lives of people who may not otherwise have involvement with the arts.

Edward Harrison Norton (born 1969) is an American actor, screenwriter, director, producer and activist. He has been nominated for three Academy Awards.

Mr. Norton works closely with the Secretariat of the UN Convention on Biological Diversity to help spotlight the importance of biodiversity to human well-being and to ensure world leaders take appropriate measures to protect the environment.

Mr. Norton is the President of the Board of the Maasai Wilderness Conservation Trust, a community conservation organization that partners with traditional communities in East Africa to conserve key ecosystems by developing sustainable, natural resource-based economic revenues. Mr. Norton also serves on the Board of Trustees of Enterprise, which works to move families up and out of poverty and transform low-income communities across the US through the development of decent affordable housing and social service networks.

As a Messenger of Peace, Charlize Theron focuses on the prevention of HIV and the elimination of violence against women. She founded The Charlize Theron Africa Outreach Project (CTAOP) in 2007 with the mission to help African youth keep themselves safe from HIV. The Project supports community engaged organizations that use innovative and community specific programming to work with youth, bringing critical resources like access to youth friendly healthcare, sexual and reproductive health education, life skills, and psychosocial support.

Ms. Theron also filmed a series of public service announcements in support of the Cape Town Rape Crisis Center, urging zero tolerance for rape or domestic violence. Ms. Theron travelled to the Democratic Republic of Congo in 2009 and 2011 to help raise awareness about the plight of women and girls victims of sexual violence.

Eliezer "Elie" Wiesel (born September 30, 1928) is a Jewish-American professor, Holocaust survivor, Nobel Laureate, writer and human rights activist. He is the author of 57 books, including Night, a work based on his experiences as a prisoner in the Auschwitz, Buna, and Buchenwald concentration camps. Wiesel is also the Advisory Board chairman of the newspaper Algemeiner Journal.

Mr. Wiesel has lent his compassionate voice to a variety of United Nations causes, such as focusing public attention on eradicating poverty and the atrocities occurring in the Darfur region of Sudan. A U.S. citizen since 1963, he continues to be a vocal advocate of human rights and world peace through The Elie Wiesel Foundation for Humanity which he founded with his wife, Marion Wiesel, in 1986.

Stevland Hardaway Morris (born 1950), known by his stage name Stevie Wonder, is an American musician, singer, songwriter, record producer, and multi-instrumentalist. A Grammy Award-winner, he has written, produced or performed songs for charities in support of disabilities, AIDS, cancer, diabetes, hunger and homelessness, domestic abuse and other causes on behalf of children and adults. He has been blind since shortly after birth.

He has been recognized for his philanthropic efforts by the U.S. President’s Committee on Employment of People with Disabilities, the Children’s Diabetes Foundation, Junior Blind of America, and the creation of the Wonder Vision Awards Program.

In 1983, he spearheaded a campaign to make Martin Luther King Day a national holiday in the United States. He also advocated for the end of apartheid in South Africa.

The Sun Shines all over the World Ato Dakheel is a Yazidi born in Hardan, a small village in northern Iraq. In 2014, Ato and his family fl...