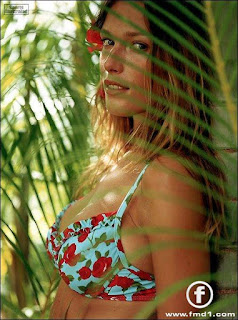 New York, Oct. 15 /PRNewswire/ -- The African Wildlife Foundation [AWF] announced today that supermodel Veronica Varekova, who has been featured in campaigns for Sports Illustrated and Victoria's Secret, has been named one of the first AWF Goodwill Ambassadors. Veronica will aid in efforts to raise awareness and funds to support initiatives focused on conserving large landscapes, protecting endangered species, and empowering local communities working in AWF's nine African Heartlands; these vast areas of land are essential to conservation due to an unmatched concentration of wildlife and potential to sustain viable populations for the future.

"I made frequent trips to Africa growing up and quickly fell in love with the continent," Veronica commented. "On my last trip, I was able to experience AWF's work and accomplishments firsthand, which made me realize how much I wanted to be involved with this Foundation and help raise their profile in the US I truly respect and value their mission, philosophy, work ethic, and am excited to get on the ground to begin my work."

As one of her first projects, Veronica will travel to Rwanda in late October to liaise with conservationists working in the forested habitat surrounding the Sabyinyo Silverback Lodge. This community-owned lodge was created as part of AWF's Conservation Enterprise program; it provides the community with economic incentives to conserve their lands and treat wildlife not as a threat to their livelihoods, but as a boon to their prosperity.

Another newly appointed AWF Goodwill Ambassador and good friend, Ben Stein, will join Veronica in the hopes to secure a meeting with the President of Rwanda, Paul Kagame, to show appreciation for his country's work in supporting the conservation efforts of AWF.

"We could not be more thrilled to have Veronica involved with the African Wildlife Foundation," noted Craig Sholley, Vice-President for Philanthropy and Marketing for AWF. "Veronica shares our belief that protecting Africa's wildlife and landscapes is the key to the future economic prosperity of Africa and its people. We are confident that her passion for our mission will create additional awareness of our work."

For nearly 50 years the African Wildlife Foundation (AWF), together with the people of Africa, has worked to ensure the wildlife and wild lands of Africa will endure forever. AWF is the leading international conservation organization focused solely on Africa. AWF believes protecting Africa's wildlife and wild landscapes is the key to the future prosperity of Africa and its people.


AWF and Veronica are both Active in Social Media

On Facebook the African Wildlife Foundation operates an interactive program where you and your Facebook friends cab join them there.

We believe that protecting Africa's wildlife and wild landscapes is the key to the future prosperity of Africa and its people - and for over forty-five years we have made it our work to help ensure that Africa's wild resources endure.

Become a fan of Model and Ambassador Veronica Varekova on Facebook too where she maintains her Official Fan Page to interact with those who follow her work.

Become an Author: Blog about the Goodwill Ambassadors of the World, Social Network Public Policy, Facebook Diplomacy and other World Changing Projects that can be applied in social networking to make connections globally and bring together like minded individuals together from every corner of the world. To find out more please contact Ambassador Col. David J. Wright on Facebook at Globcal International.
Sports Illustrated