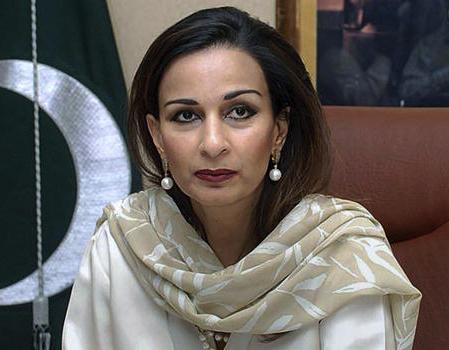 
WASHINGTON - Pakistan ambassador to the United States Sherry Rehman Wednesday said Pakistan’s democratic government has enacted a series of legislative measures to protect and advance socio-economic rights of women as the participation of half of the country’s population in national life is imperative to help the country grapple with current challenges and march forward as a strong nation, The diplomat was speaking at an event “Empowering Women : The Way Forward” at the Pakistan embassy, which she hosted to mark the International Women’s Day.

“The Pakistan story you hear in Washington is often only about the country that fights the frontlines of terror and extremism. I want to take the opportunity to say that we are not just about bombs and bullets, Pakistan is also about women who lead the way forward,” she told a gathering of American State Department officials, leaders of Pakistani-American community and women activists.

On the occasion, the Pakistani embassy also recognized the outstanding achievements of Pakistani women including Sharmeen Obaid Chinoy, the Karachi-born director of Pakistan’s first Academy Award winning film ‘Saving Face’, Ayesha Jalal, historian and professor, and the Director of the Center for South Asian and Indian Ocean Studies at Tufts University, and Shaista Mahmood, a leader of the Pakistani-American community and spouse of Riffat Mahmood, the Ambassador-at-Large.

Shad Begum, who hails from Dir, Khyber Pakhtunkhwa and whose courageous achievements would be recognized by Secretary of State Hillary Clinton on Thursday, also attended the event and was praised for her work.

In her address, Ambassador Rehman, who draws inspiration from the martyred Pakistani leader Benazir Bhutto, the two-time prime minister and founding father Quaid-i-Azam Muhammad Ali Jinnah, who both envisioned a Pakistan where women and minorities would enjoy full constitutional and legal rights as citizens of the country and contribute to its development without any discrimination.

Sherry Rehman, who has served two terms as member of the Parliament, particularly referred to President Aisf Ali Zardari’s Thursday’s scheduled signing on the bill that empowers the National Commission on the Status of Women, to be completely autonomous of government control.

The top Pakistani diplomat in Washington referred to civil society dynamics in the country like the media and said democracy brings an empowerment dividend, and Pakistani women “will be the first to rock the vote and claim their place in the sun as leaders at all level.”

The ambassador, who has had an abiding commitment to protection of the rights of vulnerable segments of the society, informed the gathering that the National Assembly has made enormous strides on protecting and advancing the rights of women in the society.

“We passed landmark legislation criminalizing sexual harassment in the workplace. We passed legislation making it mandatory to appoint neutral mediators at all levels to adjudicate charges of sexual discrimination.”

“And only last month in a truly historic action, the Parliament passed legislation clearly and unambiguously defining domestic violence and establishing procedures to protect women and children against domestic abuse. Many people have been removed for harassing women, even in government universities through the new law,” she noted amid applause from the gathering.

At the same time, the ambassador acknowledged the scale and nature of the obstacles in the way of women’s empowerment.

“Those who have power will invariably seek to monopolize it. Social justice doesn’t just materialize, no matter how many laws we make. Laws are the foundation for change, but for reform to take root, the battle for one’s rights has to be fought at every step of the way. And sometimes, we have to take a bullet to uphold our beliefs, in the hope that our children do not have to.” Source: Pakistan Today 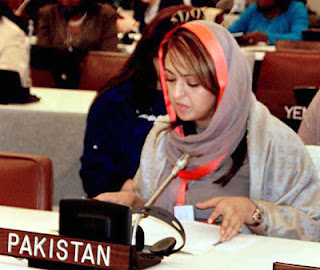 ISLAMABAD, Mar 8 (APP) - Goodwill Ambassador for Women Empowerment, Fiza Batool Gilani on Thursday said change in mindset of people regarding gender equality can only help turn the dream of women empowerment into tangible reality. Addressing at a ceremony in connection with International Women's Day, Fiza Batool said “active participation of womenfolk in social, economic and political spheres of national activity is imperative to ensure national progress”. Fiza Batool lauded the role of Shaheed Benazir Bhutto as “ardent advocate of women empowerment”. The Shaheed leader has inspired generations of womenfolk across the world, particularly in Pakistan, through her leadership and initiatives for the cause of women, the ambassador said.

Elaborating the national theme “Legislation for protecting women’s rights” on international Women Day, Fiza batool lauded the role of the current parliament which has passed several legislations for the protection and promotion of women rights.

“Pro women legislation are a clear manifestation of the priority the Pakistan people’s Party government attaches to the cause and agenda of women empowerment”, she said.

Fiza Batool Gilani stressed upon all mothers that they should treat their sons and daughters on equal footings so that the concepts of gender equality and non-discrimination against women become the part of their training at home.

“Mothers must not give precedence to sons over daughters and both the genders should be treated on equal basis at home”, she emphasized.

The ambassador said that curricula being taught in institutions must incorporate the concepts of gender equality and non-discrimination against women. Source: Associated Press of Pakistan
Sherry Rehman Washington Women's Day