(CNN) -- Invisible Children, the nonprofit group that produced a hugely popular half-hour documentary about the notorious African warlord Joseph Kony, says it will release a new film Monday to respond to criticism and questions over its approach. 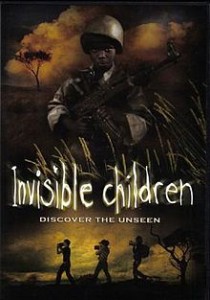 The group's "KONY 2012" video had been viewed more than 72 million times on YouTube by late Sunday night. Invisible Children, based in San Diego, says it wants to make Kony a household name and drum up global support to end the murders, rapes, abuses and abductions committed by the Lord's Resistance Army in central Africa.

But with the popularity of the video and kudos to the filmmakers for raising awareness of an African tragedy came a flurry of questions about Invisible Children's intentions, its transparency and whether the social media frenzy was too little, too late.

"There's nothing to hide -- Invisible Children has been transparent since 2004, when we started," Ben Keesey, the group's chief executive, said in an interview on "CNN Newsroom" Sunday night. "That's our intention and we want to show that this campaign is part of a model and strategy that's comprehensive."

He said the group planned to release a 10-minute video Monday "that clicks through some of the questions."

The interview with Keesey and Jason Russell, the director of the video and one the founders of Invisible Children, followed fierce debate online and in the news media over the group's methods and strategy.

Russell said he had been a little surprised by some of the criticism. "I didn't know there was that much tension," he said.

Evelyn Apoko, who was abducted by the LRA in 2001 and spent three harrowing years in captivity, said last week that Kony needs to face justice and she hoped the documentary would help make that happen.

But she worried that a military campaign against Kony might bring more injury to children who have suffered enough. Apoko was severely disfigured after a military bombing targeting the LRA.

"It hurts a lot of young innocent kids," she said. "They don't know how to protect themselves."

Keesey said Sunday that Invisible Children was acutely aware of those risks.

"Any approach to stop the LRA needs to be sensitive to that," he said. "It needs to do everything possible to protect those innocent women and children."

He said that was "absolutely the mission and the point of this campaign."

Now a fellow for Strongheart, a Liberia-based group that provides opportunities for young people who have survived conflict, Apoko said she found the film powerful but that the crisis goes beyond Kony.

"They should open their eyes more on the people affected by the war," she said. "And the children -- they need to find a way to protect them. They have no hope, no way to escape."

Russell said that Invisible Children had chosen Kony as a focal point in order to get its message out.

"Because of the zeitgeist of the culture and the world, we need an enemy," he said. "We need to know who the worst is."

Kony has operated in central Africa for two decades and is wanted for crimes against humanity by the International Criminal Court. In October, the United States sent 100 combat-equipped troops on a mission to kill or capture Kony.

Invisible Children says it wants Kony's name to become so familiar that it will pressure the United States and other governments to stay on the chase. On April 20, the group plans to paper cities with Kony posters.

But the media attention on Kony may actually hamper efforts to catch Kony, said Peter Pham of the Atlantic Council.

"All I can say is, it couldn't have happened at a more unhelpful moment when you look at it strategically and operationally," said Pham, a civilian adviser to the military command that sent the U.S. troops.

The film comes after a regional -- and covert -- military operation has been under way for several months. The attention could prompt Kony to go on the move again and seriously set back African and U.S. efforts to catch Kony once and for all.

The LRA terrorized Uganda for years in a failed attempt to overthrow the government. But since 2006, when it was pushed out of northern Uganda, it has largely operated the Democratic Republic of Congo and Central African Republic.

The United Nations refugee agency said last week that 3,000 people were recently displaced after fresh LRA attacks in Congo's Orientale province. The agency reported 20 new attacks since the start of the year, with one person killed and 17 abducted.

The cultish rebel group stands accused of using vicious tactics to recruit and force thousands of children into taking up arms. There are reports of child soldiers brainwashed into killing their own parents.

But several observers are urging caution, saying that Invisible Children has manipulated facts in the past and advised viewers to watch the documentary with that in mind.

A student blog called "Visible Children" linked to a photograph of Invisible Children's founders -- Bobby Bailey, Laren Poole, and Russell -- posing with hardcore weaponry with members of the Sudan People's Liberation Army, who have battled the LRA.

"The group is in favor of direct military intervention, and their money supports the Ugandan government's army and various other military forces," the Visible Children blog post said. "Both the Ugandan army and Sudan People's Liberation Army are riddled with accusations of rape and looting, but Invisible Children defends them."

Bloggers debated the merit of arming one group to fight another and questioned why only about 30 percent of Invisible Children's budget was used to help children in Uganda.

"We're an unorthodox organization," Russell said in a previous interview last week. "We work outside of the traditional box of what you think about charity and nonprofit."

He said a third of fund-raising dollars were spent on the film, another third on film-related advocacy and the rest on a mission to end the war and rehabilitate war-affected children.

"So that's our model," he said. "That's who we are. We're not World Vision. We are not these other organizations that do amazing work on the ground. If you want to fund a cow or you want to help someone in a village in that component, you can do that. That's a third of what we do."

On its website, Invisible Children said it spent 80.46 percent on programs in 2011; 16.24 percent on administration and management costs; and 3.22 percent on direct fundraising.

Invisible Children spokeswoman Noelle Jouglet said any money generated from the film will go to Invisible Children, which builds schools in Uganda. Money will also go to support a high-frequency radio station that Invisible Children operates, which broadcasts anti-LRA messages to fighters urging them to defect. CNN is unable to immediately verify this information or any of Invisible Children's activities in African nations.

Actress Mia Farrow, a goodwill ambassador for UNICEF who has visited LRA-attacked areas, commended Invisible Children for bringing "unprecedented focus" to a horrific situation but urged people to donate money to agencies like the Red Cross and UNICEF that work to help LRA victims.

"Invisible Children, if it is using such images to dupe the international community into, into ensuring that they contribute financially into its works, I'm afraid to say it is a wrong approach," he said, "and indeed its activities in northern Uganda will be further questioned, in as far as the amount of money they receive vis-a-vis the actual interventions that they make in northern Uganda where he thinks he is concerned about."

Invisible Children sent Twitter messages about the documentary to 20 celebrities, including Bono, Angelina Jolie, Jay Z, Ryan Seacrest and Rihanna. Many of the tweets about the film appear to be from fans who follow those celebrities.